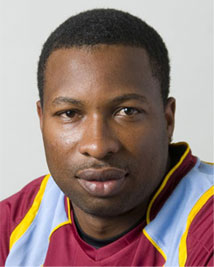 
Kieron Adrian Pollard (born 12 May 1987; Tacarigua) is a Trinidadian cricketer. He is an aggressive all-rounder, who plays international cricket for West Indies. He made his international debut in ODI against South Africa at St George's, Apr 10, 2007.

West Indians Narine and Pollard out of World T20

West Indies Tour to Zimbabwe for two-Test series in 2023 [+]
The West Indies team will start their 2023 international year in January with two Test matches against Zimbabwe.

Boland powers Australia towards 2-0 on 16-wicket day [+]
The visitors lost 10 wickets on day three across two innings, with Australia piling up 199 for 6 declared.

Chanderpaul fights after Australia declare on 511/7 [+]
Labuschagne, Head put on a 297-run stand for the fourth wicket.

Labuschagne and Head pile on West Indies [+]
They combined for an unbeaten fourth-wicket partnership of 199 to power Australia to a commanding position.