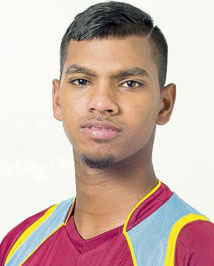 
Nicholas Pooran (born 2-Oct-1995; Trinidad) is a left-handed wicket keeper batsman, who plays international cricket for West Indies. He made his international debut in T20I against Pakistan at Dubai on Sept. 23, 2016.

Shepherd, Shakib shines as rain ruins 1st T20I [+]
Only 13 overs were possible at Windsor Park on Saturday as the first T20I between West Indies and Bangladesh finished without a result.

West Indies quicks hunt in a pack Bangladesh [+]
With six ducks in another feeble Bangladesh effort look bereft of answers in the batting department.